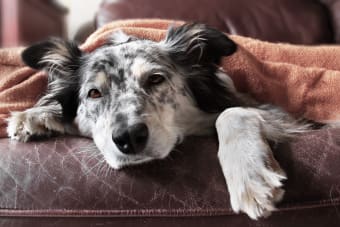 At Raintree Veterinary Hospital cranial cruciate ruptures in dogs are the orthopedic surgeries we conduct most often. A cranial cruciate ligament (CCL) in a dog can also be called ACL. This helps connect the upper leg bone to the lower leg bone. In this blog, our Hoquiam vets discuss the reasons why a dog's CCL is prone to becoming ruptured, and how this injury can be treated.

The cranial cruciate ligament is one of two ligaments in a dog's knee and it is a band of connective tissue that helps connect the femur to the tibia (the bones located above and below the knee) and lets the knee move. It's also the ligament that has the highest risk of getting injured in a dog's body.

A dog's cruciate ligament can rupture suddenly (acute rupture) or slowly tear, getting worse until a complete rupture occurs.

An acute or traumatic cruciate rupture can happen when there is an injury where the knee joint twists.  This generally occurs when a dog lands incorrectly when they jump or suddenly turn while they are playing or running, putting most of their weight on the twisted joint of their knee. Cruciate ligament ruptures are typically very painful for your pooch and will cause sudden lameness of the impacted leg.

Some breeds, such as golden retrievers, rottweilers, mastiffs, and labradors are at a higher risk of cranial cruciate ligament ruptures.

Not every cranial cruciate ligament rupture is acute. Over time, a dog's CCL can gradually wear down and stretch, leading to partial tears. This can cause pain and inflammation, although it typically doesn't cause total lameness. Eventually, the worn-down ligament can completely snap, occasionally with little activity. A dog with partial tears might only need to hop out of bed for the full rupture to develop.

If you believe your dog has injured their CCL it's very important to see a vet your vet so they can diagnose and treat the condition.

Complete cranial cruciate ligament ruptures generally have to be treated with surgery so the knee can be stabilized, especially if your pup weighs more than ten pounds. Dogs under ten pounds might be able to get better on their own but will require at least six weeks of strict crate rest. Many go on to require surgery eventually anyway.

Surgical treatments for CCL injuries in dogs include:

This surgical treatment for a ruptured CCL in dogs works by counteracting 'tibial thrust' (the sliding forward of the dog's tibia) with a specifically placed suture.

Tibial thrust happens when the transmission of weight up the tibia and across the knee, makes the tibia “thrust” forward relative to the femur. This forward thrust movement occurs because the top of the tibia is sloped, and the dog's injured CCL which is normally able to oppose the forward force, is no longer able to prevent this unwanted movement.

Extracapsular Lateral Suture Stabilization corrects tibia thrust by “anchoring” the tibia to the femur with a surgically placed suture. The suture pulls the joint tight and helps stabilize the knee, preventing the femur and tibia from sliding front-to-back while the CCL heals and the muscles surrounding the knee become stronger.

The suture must stay intact for 8-12 weeks in order for the CCL injury to heal. The suture will then start loosening or even break.

This surgery is fairly quick and uncomplicated with a good success rate in smaller dogs. It might even be less expensive than other methods for repairing a torn CCL in dogs. Long-term success varies in dogs of different sizes and activity levels.

Another surgical option for treating your dog's injured CCL is the tibial plateau leveling osteotomy (TPLO). This surgery is more complex than the ELSS and its goal is to reduce the amount of forwarding movement during the dog's stride without the help of the CCL.

In this procedure, a complete cut is made through the top of the tibia (the tibial plateau). The tibial plateau is then rotated to change its angle and a metal plate is added to stabilize the cut bone as it heals. Over the course of a few months, the tibia will gradually heal and get stronger

Full recovery from TPLO surgery will take several months although some improvement might be seen in just days after surgery. It's very important to carefully follow your vet's instructions after your dog's TPLO surgery, and restrict your dog's movements in order to let the bone heal properly.

The long-term prognosis is good for TPLO treatment in dogs, and re-injury is uncommon. The stabilization plate does not have to be removed from your dog's leg unless it starts to create problems.

Tibial Tuberosity Advancement surgery is similar to TPLO but can be slightly less invasive than TPLO. In many dogs, the recovery from TTA can show quicker than recovery from TPLO.

When TTA surgery is performed the front part of the tibia is cut and separated from the rest of the bone. Next, a special orthopedic spacer is screwed into the space between the two sections of the tibia in order to move the front section forward and up. By doing this, the patellar ligament that runs along the front of the knee is moved into better alignment and helps prevent lots of abnormal sliding movement. After this process is completed, a bone plate will be attached to hold the front section of the tibia in its proper position.

Generally, TTA surgery is performed in dogs with a steep tibial plateau (angle of the top section of the tibia). Your vet will assess the geometry of your dog's knee to determine which CCL treatment surgery is best for your dog.

On average it will take your dog six to eight weeks to recover from their surgery, with good limb function returning within three months. It's very important that you follow your vet's instructions carefully and restrict your dog's movement during this time period. The activity restriction could be less if your pup has had TPLO surgery.

Unfortunately, even dogs with successful surgery results often develop arthritis in the affected joint as they get older. Weight control and nutritional supplements such as glucosamine/chondroitin can help slow the onset of arthritis. Always talk to your vet before giving your dog any supplements.

Lots of dog dogs will receive physical therapy after the surgery to help promote recovery and prevent re-injury.

Note: The advice provided in this post is intended for informational purposes and does not constitute medical advice regarding pets. For an accurate diagnosis of your pet's condition, please make an appointment with your vet.

Do you think your dog has ruptured their cranial cruciate ligament, or are worried your dog is at risk of this injury? Contact our Hoquiam vets today to schedule an appointment.

Raintree Veterinary Center is accepting new patients! Our experienced vets are passionate about the health of Hoquiam companion animals. Get in touch today to book your pet's first appointment.

Send us a message online.